Dry Bones in the Valley second entry in Edgar Race 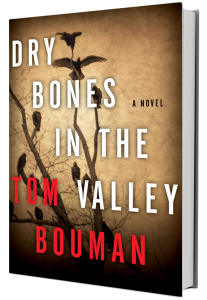 About ten pages in, I realized that I had previously read Dry Bones in the Valley, Tom Bouman’s debut novel featuring Officer Henry Farrell of Wild Thyme, Pennsylvania.  And I liked it.  That made re-reading it for the Edgar race for Best First Novel by an American Author a pleasure for me.

Here’s the setup:  Henry’s a rural cop in a small department (one deputy), where a typical crime is a stolen tractor.  Times have been hard, but landowners have been banding together to sign contracts for drilling rights on their land, and it’s dividing the community.  It’s the kind of place where the law-abiding, the lawbreakers and the lawmen all know each other and drink together in the local tavern.  Henry plays the fiddle and is more than half-way in love with the local doc.  Unfortunately, she’s his best friend’s wife.

It’s a sloppy, thawing-out March when local eccentric Aub Dunigan shoots a load of buckshot into a local ruffian trespassing on his land.  Henry comes out with a family member to see what’s what, only to find that Aub – who’s not really all there – has discovered a body in the melting snow.  Pieces of it are missing.  Who is this young man?  Who killed him and why?  Along the way to solving the murder, somebody shoots the well-liked deputy dead, and Henry uncovers a tragedy that is decades old.

Dry Bones in the Valley is a notable debut for a number of reasons, not the least of which is Bouman’s skill in depicting places and people.  His prose is elegant and spare, with carefully chosen details that illuminate the story.  Henry himself is a good man, weighed down by expectations and a tinge of sorrow.   The book is well-plotted, the action sequences are nail-bitingly realistic, and while the resolution is satisfying, it’s not all happy-happy-joy-joy.  Thank heavens.

Comparison to The Life We Bury?  Dry Bones has it all over Life.  Life has a lot to recommend it, but it is obviously a first novel.  Dry Bones is more assured, the product of a fully developed talent.  I’m waiting for more from Tom Bouman and Officer Henry Farrell.

PS:  Another note of comparison, as an aside.  What is up with the titles and book covers for these two books?   The Life We Bury is set in a small town and a university town – the cover makes it look rural.  And nobody is literally buried, and if you want to go all metaphorical, I don’t see it.  So the title is a miss for me.  Same deal, more or less, with Dry Bones in the Valley.  The cover makes features an ominous flock of birds, potentially hovering over dry bones, making you think of desert, not Pennsylvania.  And all the bones in this book are literally wet. Soaking, in fact.  I realize you shouldn’t judge a book by its cover, but this may be taking that adage too far…