My Lovely Wife last up for Edgar… 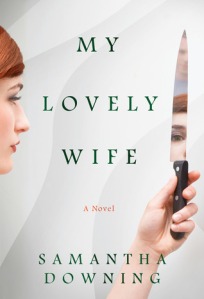 There’s just three days to go until the Mystery Writers of America announce the Edgar award winners for 2020.  I’m excited to be back reviewing and ranking the Literary Lunchbox Edgars!  I’m just getting in under the wire with the final nominee for the Best First Novel by an American author, My Lovely Wife by Samantha Dowling.  I have to admit, this is one of my favorite kinds of mysteries:  the psychological thriller.  The protagonist is a happily married man in early middle age, a tennis pro at the local country club, with a beautiful, accomplished wife and two good kids.  So why is he pretending to be deaf and picking up a woman in a bar?

There’s something a little twisted going on, and we soon come to realize that this man and his wife are playing sexual games with a deadly twist.  Told in first person by the unnamed man, it’s a story of a man pulled in over his head… someone whose better nature is overrun by his wife’s irresistible pull.  He’s trying hard not to kill anyone!  After all, the first murder was really an accident, and the second one was just because they were trying to throw the police off track, and the third one… Besides, he didn’t do the killing.  His wife did.

The plot ratchets up the intensity when it becomes apparent that the lovely wife is stark, staring nuts, but crafty and clever with it.  She’s set it up so that her husband is going to take the fall, while she gets off scot free with their unsuspecting kids.  There’s a showdown, kids fly to save dad, and all’s well that end’s well.  Or is it?  The ending’s as twisty as my pug’s tail.

I’m leaving out a lot, but that’s the crux of the plot.  The various subplots all serve to move the story forward or reveal more about the characters.  Downing does a great job luring us to rely upon her unreliable narrator, and the pace of the plot, the well-timed increase in tension, the sheer page-turning suspense in the book is fantastic.  It’s a little Gone Girl-esque.  It’s a great debut.

But how does it rank against the other nominees?  Frankly, I could make a case for any of the nominees as the award recipient (except for Three-Fifths, which others seem to adore, but I thought was pretty clunky).  American Spy and The Good Detective were really pretty neck-and-neck, and now comes My Lovely Wife to give them a run for the money.  For sheer enjoyment, I’m going to put it at the top of the list.

I’ll look forward to my own, personal celebration of the Edgars on Thursday night when the winners are announced!  Will they agree that Robotham’s Good Girl, Bad Girl is deserving of Best Novel?  That My Lovely Wife takes home the Edgar for Best First Novel?  We shall see.

Literary Lunchbox
Create a free website or blog at WordPress.com.