The only thing more exciting than the discovery of a new author you love is the upcoming publication of new books by authors you already adore.  Some fall into the “pre-order this in hardback” category (Michael Connelly, Louise Penny, Ian Rankin, Sue Grafton, and more).

Bittersweet for me was reading Sue Grafton’s Y is for Yesterday, because Grafton has announced that she’ll be retiring upon publication of the Z book (Z is for Zero).  After 35 years and 25 Kinsey Millhone books, she’s ready to be done.  I’ve read every Kinsey book starting with A is for Alibi, so slipping between the covers with her new one brought the same pleasures – familiar characters, a little spicy language and potential romance, and a  solid mystery to be solved by the PI with (now) plenty of experience.   The question – who’s blackmailing the ex-con scion of a wealthy family with a sex tape that shows him and several other teens raping a teenage girl?  Fritz McCabe is just out of jail, having done his time for killing one of his classmates, and his parents put Kinsey on the case.  As usual, the story is much more convoluted than it originally appears, and when it all unravels, the ending is a surprise, but not surprising.  Because time passes much more slowly in Kinsey’s world of Santa Teresa, California, the year is 1989.  No internet, no Google, no cell phones – but plenty of shoe leather and face-to-face interviews.  Classic.

A more thrilling read is Louise Penny’s new Chief Superintendent Gamache novel, Glass Houses.  I came to Penny midseries, but went back to begin Superintendant at the start, with Still Life.  I found it to be full of charm, heartwarming and clever, an original voice.  That has continued through the series.  With Glass Houses, as usual, Armand Gamache has a small band of ultra-loyalists to work with, including his now son-in-law Jean-Guy Beauvoir and newly minted Inspector Isabelle Lacoste, the colorful denizens of the small village of Three Pines, and the trust of those at the highest level of the Canadian government.  There are two questions to be addressed in the book:  why is a costumed figure haunting the Three Pines village green?  And will Gamache be successful in bringing down a drug cartel that is gathering so much power, he expects it will take over the country if it is not stopped?  It is no surprise to faithful readers to learn that the answer to both questions are resolved successfully, but not without great personal cost.  As Penny has ratcheted up the stakes with each Gamache book, it has occurred to me that there can surely only be so many times that the bad guys underestimate our protagonist.  Gamache is always playing the long game against difficult odds.  That, and Penny’s willingness to harm and even kill main characters we have come to know and love, adds a nail-biting quality to the already considerable tension. 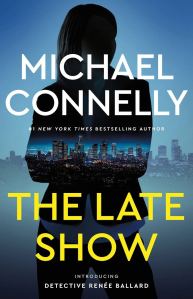 Third up is Michael Connelly’s The Late Show.  Unlike Grafton and Penny, Connelly is not delivering another book in an already loved series (Harry Bosch, Mickey Haller), but taking a flyer with a new lead character, LAPD detective Renee Ballard.  Brave man to take on a female protagonist, and he does an good job portraying the challenges and the characteristics of this young female.  Connelly’s given her the quirk of homelessness – she surfs and spends many nights with her dog in a tent on the beach – which I found unnecessary.  (I imagine he’ll dispense with this or use it as a pivotal plot point in a future book.)  Ballard’s working mostly on her own on the night shift (nicknamed “the late show”) as punishment for filing a sexual harassment complaint against a supervisor.  Still, she’s does her best for the many victim she meets, and works hard to shine while doing so.  It’s tough, because she’s supposed to hand off the cases she catches to the detectives who work days.  Kind of like a doctor who always does the intake, and never gets to cure anybody.  Still, she’s determined to get to the bottom of the ruthless beating of a transgender prostitute – a victim type that is often marginalized by the police – and also to figure out what really happened in a nightclub shooting.  Needless to say, she does, and it’s a pretty wild ride.  My take – definitely a hit and a series I will be sure to read.