Three-Fifths Up Next in Edgar Race 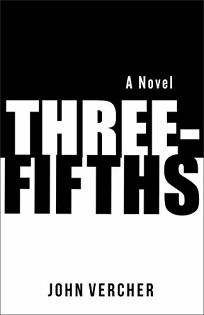 Next up:  Three-Fifths by John Vercher.   It’s working class Pittsburgh, 1995 – hardly post-racial America – and 22-year-old Bobby Saraceno has a secret: he’s passing for white.  He never met his African-American father, and Isabel, his ashamed white mom, and racist grandfather have made sure that nobody knows the truth.  Now his good friend Aaron is home from prison, and Bobby’s shocked to find that he’s become a die-hard white supremacist.  That’s pretty ironic, because in high school Aaron was the embodiment of black culture, a black-wannabe.   Reunited, the two make a stop at a convenience store and Bobby, horrified, watches Aaron attack a young black man, beating his head in with a brick.  Aaron hops in the car and at his urging, Bobby drives off.  Reader, the young man dies.

What follows is Bobby’s story of angst, coming to terms with his identity, redemption, and ultimately, Bobby’s tragedy.  It’s interspersed with Isabel’s perspective as a young woman, how she came to be involved with Robert (Bobby’s dad), and why she chose to never to tell him of her pregnancy… and her interaction with him when she decides to seek him out, in the book’s present day.  A third perspective is Robert’s, a physician, and his surprise to see Isabel again and shock to learn he has a son.

This is a lot of plot, fueled by a ton of coincidences, and with numerous misunderstandings, both past and present.  There are many “you have got to be kidding me” moments.  It’s a soap opera of a book, but with plenty of explication.   Even the title over-reaches.  (“Three-fifths” refers to the proposed tax compromise of each person counting as one person and each slave counting as 3/5 of a person.)

Mystified about why the book received an Edgar nomination, I checked the ratings on Goodreads – 4.3.  People evidently loved this book.  I continue to be mystified.  Maybe it would be a good movie.  Needless to say, Three-Fifths does not bump either of the top two, and takes the #3 spot on the Edgar ranking.