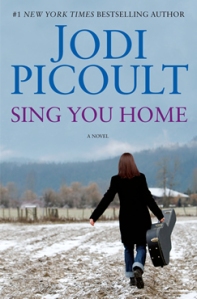 Jodi Picoult’s 18th book, Sing You Home, follows her usual formula of combining a court case with a personal story, often revolving around a medical condition. Asperger’s.   Osteogenesis imperfecta.  Date rape.  The murderer on death row who wants to be executed so he can become a heart donor.

This novel – effectively told from several perspectives – revolves around the three left-over embryos of a now-divorced couple.  (Spoiler alert!  In fact, stop reading now, because there’s no way I can keep the plot out of the review.  Just know it’s a mixed review, and probably not one of the top entries for Picoult fans.)

Anyway, alcoholic loser dad (Max) finds Jesus and is used by the Christian right in a court case designed to make law that limits gay rights.  Sad-and-lovely mom (Zoe) puts up with the divorce that loser dad insists on, only to fall in love and marry – in very short order – her new best friend (Vanessa).  Add tears, instant lesbian, I guess.  Throw in cancer for mom, necessitating hysterectomy, just for extra measure.

I think you can see the biggest drawback to Sing You Home – the characters have to jump through hoops in service of the plot.  Zoe is a music therapist- hence the name, Sing You Home.   She uses  music to draw out and help heal those who are physically and/or mentally ill.   When just at a crucial moment, the plot requires a suicidal teenage girl that Zoe had been helping to accuse her of  coming on to her – and the teenage girl just happens to be the daughter of the pastor who had coerced Max into suing for “custody” of the embryos – it felt like the ultimate manipulation.

And it was, until the end, when Max broke free at just the right moment.  Then THAT was the ultimate manipulation.  Although the bad guys had been successful in getting Zoe to back down from her fight for the embryos, Max realizes that she should have had them all along.  So he gives them to her.  And the next thing you know, it’s six years later, and lucky girl Sammy has two wonderful Moms AND a Dad!

I know.  I know.  Snarky.   Like a deer in the headlights,  I saw the plot zooming down the highway like a speeding SUV, and I didn’t get out of the way.  Because those headlights are mesmerizing.  I didn’t like the book, I found it heavy-handed and manipulative, and yet I read every blessed word and it only took me two days to do it.  Because there’s something about Jodi Picoult.  The people may be jumping around like marionettes, but you still like them.   The lesbian love affair might be about as believable as Jenny’s conversion in the L Word, but Zoe and Vanessa are just so dang nice.  And you can tell they really do love each other.  So Picoult keeps you hanging in there.

I’m not sure how well this book will fare.  I’m sympathetic to the plot and the characters, but generally turned off by the formula.  Picoult fans are probably favorably inclined toward the formula… but are they going to go for the girl-on-girl love and lesbian-family-happy-ever-after storyline?  Maybe.  Women tend to be more socially liberal and the squeaky-clean love story is noble, especially compared with the greasy, unctious brand of Christianity with which it is contrasted.  Just once, I’d like to see a story like this where all the characters are honest, doing the best they can, and struggling with reconciling their beliefs and their actions, where instead of good guys and bad guys, there are just good guys. With plenty of conflict and heartache.

Still, who am I to tell Jodi Picoult how to write?  Her books only sell 5 million+ apiece.  And this one comes with a CD of songs that is billed as the “companion soundtrack,” which some might find appealing.