First up in Edgar Countdown: Allen Esken’s The Life We Bury

In the weeks between now and the Edgar Awards Ceremony on April 29, I’ll be reading, reviewing, and ranking the nominees for Best Novel and Best First Novel by an American Author.  When the Edgars are polished up and handed out, we’ll see whether the Literary Lunchbox Edgars match the MWA Edgars.  Typically it’s not 100% (although I did call them both in 2010).  In a change of pace, I’m starting with the new authors and head down the home stretch for a big finish with the Best Novel nominees. 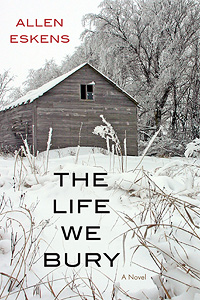 First up is Allen Eskens‘ The Life We Bury.   One positive right off the bat:  written in first person, Eskens’ protagonist, Joe Talbert is a fresh voice. The prose is clean and the character’s engaging.  His problems are real, and the way he handles them makes us root for him.

Joe’s a college kid from a small town, struggling to put himself through the University of Minnesota, dragged down by his alcoholic gambler of a mother and guilt-ridden because he’s not able to protect his autistic brother.  He lives in a cheap apartment across the hall from Lila, a cute co-ed with a past.  An English assignment – to interview someone and then write a biography of that person’s life – sends him on an unexpected quest to solve a decades-old crime.

Carl Iverson is a Vietnam vet, a hero, a convicted rapist and murderer – and he’s dying of pancreatic cancer.  He vows to tell the truth, no matter what; it’s his “dying declaration.”  Carl’s a good guy who is haunted by his actions in Viet Nam- he feels guilty both for not doing more and for the actions he did take.  (It’s clear to the reader, of course, that Carl has nothing to blame himself for.)  But he denies raping and murdering Crystal Hagen 30 years previously.  And as Joe begins to validate Carl’s story, with Lila’s help, it becomes more and more apparent that the killer may still be out there.

Of course he is!  And he’s pretty crafty.  When he gets his hands on Lila, the suspense ratchets up.  Not much of a spoiler alert to let you know that it all works out in the end.  The bad guy is vanquished, Joe and Lila are injured but live on, and Carl Iverson’s conviction is vacated before he dies, peacefully, in his sleep.  The only fly in the ointment is that Joe’s out of money for college because he paid his awful mother’s bail.  But wait!  The bad guy has killed multiple women, the cops connected the dots, and there’s reward money in it for Joe.  Yay!  College is back in the cards and he even has enough money to take care of Jeremy.

Here’s what I like about The Life We Bury:

And now here are a few drawbacks:

Overall, Allen Eskens has real talent and the book itself is well worth reading.  I’m looking forward to seeing more from him, and for now, the Literary Lunchbox Edgar Ranking has him at #1.

This entry was posted in Commentary, Review and tagged Allen Eskens, edgar nominee, Review, The Life We Bury. Bookmark the permalink.