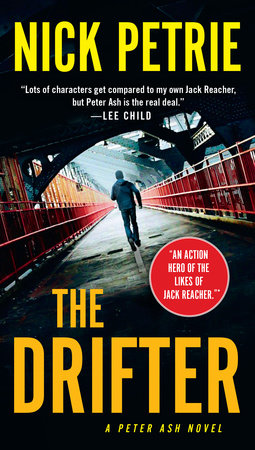 “Lots of characters get compared to my own Jack Reacher, but Petrie’s Peter Ash is the real deal.”   That’s the blurb from Lee Child on Nick Petrie’s debut mystery, The Drifter.  I try not to go into a book with preconceived notions, but once read, that blurb tends to influence your perceptions.  And Ash does have his similarities to Reacher.  Like Reacher, Ash has served in the military, is on the road and has few ties.  He’s also single-minded and a handy guy to have on your side in a fight.   They both have a strong sense of loyalty and their own definitions of right and wrong. And I’m a big Reacher fan, so this is setting the bar high.

The Drifter starts with a prologue – who is this man in the black canvas chore coat driving around in a pick-up truck with false id, buying fertilizer?  We don’t know, but by the end of the book, we get to know this guy, his profession and his unusual code of honor that results in his partnering with Ash to foil a terrorist plot  at the last minute.   So, while I usually an not a prologue fan, I give this one a thumbs up because it builds suspense and is integral to the plot.

In the meantime, Ash is on his belly, crawling in the dirt under Dinah Johnson’s porch and trying to figure out a way to overpower a 140-lb. pitbull mix that’s dead-set against coming out, without getting maimed.  His solution is clever and humane, and once he’s subdued the dog and tied it to a tree, his next action is to give it water from his own water bottle.  “Dog’s thirsty,” he explains to Charlie Johnson, Dinah’s son.

And thus, in the first chapter, we know a lot about Peter Ash.  We also know a lot about Nick Petrie – he knows how to set the stage, reveal character, and build suspense.  Over the subsequent chapters, we find out why Ash is there – to atone for not being there for his Marine buddy, Sgt. Jimmy Johnson, who committed suicide the month before, leaving behind a widow (ER nurse Dinah) and two boys (Charlie and Miles).  His pretext – doing “what needs to be done” as part of a VA program, which results in his offer to rebuild the Washington’s falling down porch.  His baggage – he is suffering from PTSD and can only stand to be indoors for short periods of time.

Of course, the straightforward narrative becomes  complicated almost immediately, when Ash discovers the dog was guarding a suitcase containing $400,000 and four packs  of C4 explosive under that porch.  A hard-looking case with a gun and a black SUV is lurking about.  And Dinah turns out to have resources of her own, in the form of a long-time tie to a smooth, smart and strong local crime lord named Lewis.

Ash’s unraveling the connections that lead to a hedge fund and its Machiavellian owner is a complex but gripping process.  The plot?  To blow up a bank, throw the markets into unrest, and make a fortune. Along the way, Ash discovers the truth about his friend Jimmy, builds a strong bond with Jimmy’s dog Mingus, and learns how good people can be twisted to do bad things.  In the end, good guys turn out to be bad guys, bad guys turn good, and the day is saved following a super-scary chase scene.

The Drifter is a classic thriller, and Petrie worked hard to lift it a bit above through character complexity.  He has varying success with that – the emphasis on the psychic impact of combat can be seen as exploitative, and the upright nurse, crime lord with a sensitive side, callous hedge fund owner, and crooked cop are pretty formulaic.  But it all hangs together quite well and the Ash character is compelling, so all told, it’s a very strong debut and I look forward to more from Petrie.

It’s a tough call where to place it on the rankings.  Each of the four books are so different, with Under the Harrow falling in suspense, Dodgers in literary, IQ detective and Drifter thriller.  After careful consideration, I’m going to place it #2.  As a sheer page-turner, it’s a good one, but not quite up to IQ.  But I have to say, I’d recommend all four of these books – this is a great crop of debut novels and I’m eager to see how the last two stack up!