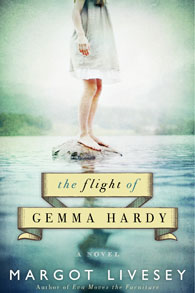 Margot Livesey’s new book, the Flight of Gemma Hardy, is an imagining of Jane Eyre transplanted to Iceland and Scotland, with Gemma as Jane and Hugh Sinclair as Mr. Rochester.  Not surprisingly, the story feels familiar even if you don’t twig to the Bronte homage.

Gemma’s a good soul.  A plucky child from the start, she faces more adversity in her young life than any Dickens character:  her mother’s death, her father’s death, her removal from Iceland to Scotland, the hatred of her aunt and cousins,once held at bay by her loving uncle, unleashed after her uncle’s unfortunate death.  Off she goes to school, where as a scholarship student she is actually an unpaid drudge.  She makes a friend (sickly of course) who subsequently dies in her arms.  The school fails, she looks for a position and ends up as governess to Nell, niece of Mr. Sinclair.

Sinclair is dashing.  There are sparks.  A romance.  An almost-marriage.  Then, the tragic truth about Sinclair comes out –  and Gemma flees to Iceland, where she discovers the love of a new family.   Who is surprised when Mr. Sinclair arrives in the final pages to reclaim his true love?

I’ve given away a ton of the plot.  Sorry about that, you probably knew the deets anyway, if only from the movie.  (And sorry about the car ad!  Be patient.)

The negatives of this book are all from the original – primarily bothersome is the romance between the full-grown man and the barely out of puberty teen (especially notable since Gemma is small for her age).   Still, the story is engaging, the characters are likable, Mr. Sinclair’s secret is understandable, and the lessons go down pleasantly enough.  I’d recommend The Flight of Gemma Hardy highly to anyone wanting a good, old-fashioned read.

Other books of by Margot Livesey that I’ve enjoyed include Eva Moves the Furniture and Banishing Verona.  I see there are several other novels I’ve missed; definitely will check them out when time permits!

This entry was posted in Commentary, Review and tagged book review, Margot Livesey, The Flight of Gemma Hardy. Bookmark the permalink.