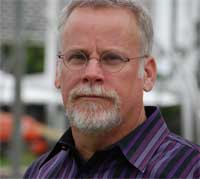 You guys remember this post, right?  Where I kvetched about being a chump for joining Printers Row and paying extra for something that I thought should be a regular part of the Chicago Tribune?  Even worse was seeing that the price went down, down, down for people who just subscribed to the journal, rather than paid for membership… the perks of which I never took advantage of.

Until now.  Yes, I went as a VIP to the Printers Row Live event where Julia Keller, whom I adore, interviewed Michael Connelly.  Third row.  Great view.  Then, thanks to my purple member wristband, I was third in line to get my book signed. He smiled.  He wasn’t tired yet.  Awesome.

It was a great event.  Michael Connelly is a wonderful crime novelist.  His main character is LA homicide detective Hieronymus Bosch (Harry), who is motivated by his mother’s murder to solve crimes.  The new Harry Bosch book is The Black Box, wherein Harry revisits a cold case to solve the 1992 murder of a Danish photojournalist during the LA riots following the Rodney King verdict.  (I can’t believe this was 20 years ago.)  I am on page 106.   Review to come.

In the meantime, here are 10 things I learned about Michael Connelly at tonight’s event: