Tey stands the test of time 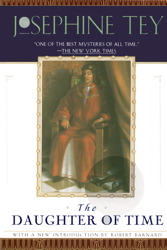 Josephine Tey may have shuffled off this mortal coil sixty years ago, but I was recently reminded of her lasting impact on crime novel genre when my husband brought home a slender paperback: her book, The Daughter of Time.

The book features none of those elements that are so essential today.  The protagonist has no flaws, or at least they’re not very serious ones.  Nobody is armed, there is no hand-to-hand combat or car chases, and no CSI forensics.  There’s not even a crime scene to speak of.  And romance?  If there is any, it’s all off scene.

What there is plenty of is intelligence.  Here’s the set-up:  Detective Inspector Allan Grant is in hospital.  He’s stuck there.  He’s bored.  And a good friend challenges him to put his brain to good use and solve a historical mystery.  He’s given a stack of photos to flip through, and one catches his eye.  Who is it?  The man looks like he’s beleaguered, but has a noble countenance.  A man behind the bench, not on the dock.

It’s Richard III.  That evil hunchback that every British schoolchild knows murdered his nephews in the Tower.  But did he?

Bed-bound, Inspector Grant prevails upon those around him to visit the bookstores and the library for him.  Fortune smiles upon him in the form of a research assistant, the charming American, Brent Carradine.  Together, they examine the logic of the supposed crime and peel back the slanderous fiction by unearthing contemporaneous documents that prove without a doubt that Richard III was no murderer.

It’s an engrossing exercise in mental calisthenics that features charming characters engaging in a great deal of chat.  I’m torn – would today’s mystery buffs, who eat up Harlen Coben, Michael Connelly, Stieg Larsson, Janet Evanovich, have the patience for a book that is so low on snark and kick-ass?

I think so, yes.  The Daughter of Time may not be fashionable, but it offers us as readers the opportunity to accompany the main character on a journey of discovery; to examine, accept or discard, the clues; and to resolve a mystery we care about.  And isn’t that what lies at the heart of the genre?

This entry was posted in Commentary, Review and tagged Josephine Tey, The Daughter of Time, the golden age of british crime. Bookmark the permalink.