I remember when I first read my first John Grisham book.  The Firm was (and is) a pulse-pounding, labyrinthine legal thriller, expertly plotted and with characters you care about.  Awesome.  I back-tracked and read A Time to Kill, which is now enshrined in my memory in two ways:  the b00k – which made me turn pages ferociously while blinking back tears – and the excellent film featuring Matthew McConaughey and Samuel L. Jackson.  The Pelican Brief.  The Client.  The Runaway Jury.  That man was on a serious roll. 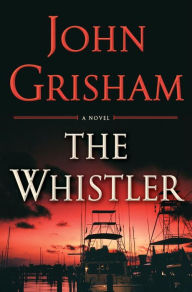 Grisham’s The Whistler is not up to that standard.  The basis for the story has a lot of promise – an informant tells investigators for an underfunded and undermanned agency that investigates judicial misconduct that a prominent judge has been taking bribes to rule in favor of a Florida mob that’s exploiting an Indian tribe to rake off untold millions in illegal profits from a variety of unsavory ventures.  The investigators – Lacy Stoltz and her partner Hugo Hatch – are a likable, honest, intelligent pair who are pretty naive, and seriously outgunned by both the informant and the bad guys.  Tension ratchets when Hugo is killed, the pair having been lured to a remote location, their car deliberately rammed by a stolen van, and Lacy’s memory of the event is hazy.

There are a myriad of complications – the informant is just a front man for the real whistleblower, who is close to the judge and not difficult to identify. With the exception of Lacy, it’s hard to care much about any of the good guys, and the bad guys are so over the top they’re practically twirling their villainous mustaches.  But most egregiously, the legal noose tightens with little panache – it’s a straight march from figuring out who did what to bringing them to justice, all laid out nice and neatly in the epilogue.  All the ingredients for a legal thriller are there, it’s just not very thrilling.

Still, The Whistler is a huge improvement over Grisham’s most recent book, Rogue Lawyer.  I got that one as a  CD to listen to while making a long drive by car, and actually stopped at a rest stop to look at the cover to make sure it was really John Grisham.  It’s less a novel than a series of long short stories featuring a cage-fighting, low-life defending, underdog defense attorney.  He’s so colorful as to be technicolor, and about as believable as a Marvel comic book.  I’m sure it had its fans, though.

Recommend The Whistler as a Christmas gift for your thriller-loving dad?  If he’s discerning, you might give it a pass.  If not, go for it.  The Whistler may not be vintage Grisham, but it’s still Grisham.

Tagged A Time to Kill, John Grisham, Review, Rogue Lawyer, The Firm, The Pelican Brief, The Runaway Jury, The Whistler