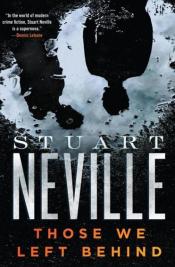 I’m a Stuart Neville fan.  I was introduced to his Belfast novels series this year, when The Final Silence was up for the Mystery Writers of America Edgar Award for Best Novel.  (Click here for my glowing review of that book.)  Neville didn’t win, but the book was a winner despite that.  Of course, I soon read his backlist and enjoyed them greatly.

Without a doubt, his new book — Those We Left Behind — is up to his high standard.  It’s a world of grays, not black and white.  And if the villains are psychologically twisted, the good guys aren’t completely pure-hearted either.

Seven years ago, the Devine brothers, age 12 and 14, murdered their foster father.  Ciaran, the younger, confessed, saying that he killed the man because he had been sexually abusing his brother Thomas.  Thomas agreed and said he tried to stop Ciaran but it was too late.  DCI Serena Flanagan has the strong suspicion that Thomas was the killer and Ciaran was taking the fall for him.  She used every psychological trick in the book to gain the boy’s trust, a technique that backfired when Ciaran made a clumsy sexual advance.  Her reaction killed the rapport, he stuck to his story, and was off to prison.  Thomas, too, as an accessory.

Who is guilty?  Everyone, of something.  Neville’s characterization is spot-on, fully developed, with no cardboard cut-outs to be found.  There’s a feeling of inevitability in the plot, that Ciaran’s prison term put all their fates on “pause,” and with his release, the pent-up pressure is released.  In just a few days, the brothers are locked once again into a dreadful spiral of violence.  The end is both shocking and unsurprising.  A side plot about the possible murder of a woman in Serena Flanagan’s cancer support group, is compelling.  Neville fans will rave, any fan of the genre will be enthusiastic, and I heartily recommend it!

Beat the clock: This Dark Road to Mercy & the Edgars

Super-speedy rereading occurring here in Okemos, as I endeavor to get all the nominees reviewed and ranked before the Wednesday evening Edgar banquet.  I imagine all the authors (many crime fiction luminaries!) calming their respective tummy butterflies as the hours grow short.  Next up:  Wiley Cash‘s This Dark Road to Mercy.

Cash was unknown to me prior to this nomination.  In fact, Dark Road is just his second novel.  His debut, A Land More Kind than Home, is on my must-read-after-the-Edgars list.   An Edgar nom for Best Novel on his second outing is quite an accomplishment, and it’s well-deserved.

Here’s the set-up:  Twelve-year-old Easter Quillby and her 9-year-old sister Ruby are in a foster home following their mother’s death by overdose.  The girls have had a tough life with their troubled mom and their dad, a former pro baseball player named Wade Chesterfield, gave up his parental rights years ago.  Now Wade wants them back, and that means sneaking them out the window and taking them on the run.  And it’s not just family court that’s looking for them, it’s a hit man with a grudge against Wade that’s even more important to him than getting back the hundreds of thousands of dollars the opportunistic Wade lifted from mobbed-up criminal Tommy Broughman.

The story is told from three perspectives:  Easter, would-be hitman Robert “Bobby” Pruitt, and Brady Weller.  Weller is the girls’ guardian ad litem, a former police detective who was forced from his position when he accidentally ran over – in his own driveway – the teenage neighbor who mowed his lawn.   The multiple POV approach works well for the reader, and we quickly bond with both Easter and Brady.  It would be a stretch to say that I bonded with Pruitt, but his motivation… and the depths to which he would sink in order to harm Wade… were clear, believable, and chilling.

While a compelling crime novel, the book is even more effective as the story of the love that binds a family together, character flaws and all.  I forecast a film treatment in Dark Road’s future.  Unfortunately for Cash, he’s up against some pretty heavy hitters in this year’s Edgar race.  Although it’s a good story, well-told, he’s outclassed by his competitors.  Hence, the eminently readable Wiley Cash takes the #5 spot. 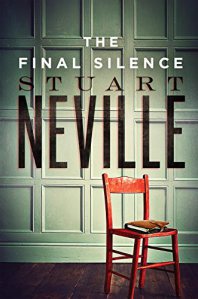 I’ve got to tell you, 2015 is the toughest race yet for the Mystery Writers of America Edgar Award for Best Novel.  So far I’ve reviewed two books by well-known and well-loved authors of the police procedural, the UK’s Ian Rankin and USA’s Karin Slaughter.  And the competition heats up further with the third entry, Stuart Neville‘s The Final Silence.  Neville was unknown to me prior to this nomination, but I’ve come to learn that he is a popular Scottish crime fiction writer.  His primary protagonist is Detective Inspector Jack Lennon of Belfast.

In this outing, DI Lennon is just barely a DI.  A widower, single parent to a traumatized daughter following the very-likely-Jack’s-fault murder of her mother, Jack’s addicted to painkillers and making a mess of his personal and his professional life.  When Rea Carlisle, politician Graham Carlisle’s daughter, inherit’s her uncle’s home, she also inherits his secrets:  Uncle Raymond was very likely a serial killer.  Her abusive dad wants to burn the evidence, her cowed mother goes along with that plan, but Rea turns to an ex-boyfriend for help:  Jack Lennon.

Of course, by the time Jack meets Rea at the uncle’s home, someone’s broken in and lifted the book… and he wonders if it ever existed.  She gives him an old photo of Uncle Raymond with Graham Carlisle and some others, which makes it clear that not only did Carlisle know his brother-in-law a great deal better than he let on, they both had been involved in some kind of paramilitary organization back in the day.  “Find out if my father was even suspected of anything . . . bad,” she asks.  Jack reluctantly agrees and heads out, slamming the stubborn front door three times to get the lock to catch.

By morning, Rea is dead, bludgeoned to death by the very crowbar she used to pry open the locked door her uncle kept his secrets hidden behind.  And Jack Lennon’s the primary suspect.  Detective Chief Inspector Serena Flanagan is investigating.  DCI Flanagan is smart and tough, with a strong sense of character judgment, a supportive spouse and two small children.  She’s also challenged with a breast cancer diagnosis that she’s hiding from her husband.

While eluding arrest, Lennon manages to use the one friend he has left on the force and a criminal who owes him a favor or two to unearth the truth about Graham Carlisle, his brother-in-law Raymond Drew, and the strange friendship Raymond had with his colleague at arms, a serial killer known as the Sparkle.  Prodded by DCI Flanagan, he also manages to pull himself up out of the depths and give up the comfort of pills-and-booze and rescue his daughter from the clutches of his dead wife’s controlling relatives.

So.  Augh.  Tough one.  Here’s what’s compelling about The Final Silence: Great characters, heroes, villains, and victims alike.  Lennon’s a flawed but good guy.  Flanagan’s out-and-out awesome.  Uncle Raymond’s pathetic.  The Sparkle is compellingly twisted. And Rea Carlisle’s a victim, but she’s around till chapter 16, which gives us plenty of time to admire her and to gasp in shock when we read Neville’s first line in that chapter:  It took hours for Rea Carlisle to die.   Her parents leap off the page, real people.   And the plot makes the book a page-turner.

But how does it compare to Ian Rankin’s Saints of the Shadow Bible and Karin Slaughter’s Cop Town? Frankly, we’ve got three 5-star books here.   I could make a compelling argument for any one of these books to receive the Edgar.  But when all is said and done, I’m going to continue to give it to Cop Town for originality, move The Final Silence into the #2 position for characterization, and leave Saints of the Shadow Bible third in the ranking.  (Although I reserve the right to change my mind upon further reflection, that’s how conflicted I am.)