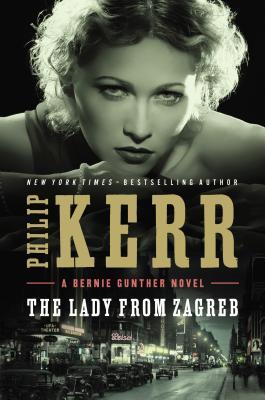 Shades of 2012!  Philip Kerr is up again for an MWA Edgar Award for Best Novel for a Bernie Gunther historical crime novel.  This year’s entry is The Lady from Zagreb.  In 2012, it was Field Gray.   He didn’t win in 2012 – the award went to Mo Hayder’s Gone, which I adored – and I had ranked Field Gray fourth on my list.  Click here to read that review.

If you’ve clicked, you know that I struggled mightily with that book.  This one has many of the same issues, but I went into it bound and determined to give it a good shot. It’s set mostly in 1942/43, although the book opens in 1956 with Bernie in a movie theater, watching a film featuring the lovely Dalia Dresner.  This leads him in a reverie, remembering his time together with the movie star.

How did Bernie Gunther, the reluctant Nazi, get hooked up with Dalia Dresner, who was even more fantastic than Hedy Lamarr? It’s a long story.  Very long, given the side trips that Bernie has to traverse to tell it.

Here’s a quick overview:  Bernie is tapped to give a speech at an international police conference at the Villa Minoux. Attorney Heinrich Heckholz wants Bernie to to snoop around while he’s there,  to find some evidence he needs to help Lilly Minoux, who used to own the house, get it back (complicated story).  Bernie’s game.  He finds tons of info, but nothing helpful to Minoux.  When he goes to report, he finds Heckholz is beaten to death with a bust of Hitler in his office. This is treated as black humor.

Fast forward a year.  Joseph Goebbels asks Bernie to help movie star Dalia Dresner locate her estranged father. Goebbels, who is in charge of the German Film Industry, has it bad for Dalia.  Dalia’s married, uninterested in Goebbels romantically, but willing to let him help her.  Sure enough, Bernie is besotted by Dalia and would do almost anything to help her, include traveling to Yugoslavia to find her father.  We get the hint that he might not be the nicest guy.  In exchange for a great car to drive to Yugoslavia in, Bernie also runs an errand for General Schallenberg.

Along the way, Bernie witnesses some horrific cruelties, mass murders that makes the concentration camp gas chambers look humane.  He finds Dalia’s dad, and the man is a monster.  He gets kidnapped and almost tortured by American spies, but gets saved by the Gestapo, who also want to murder him.  Fortunately, they want to get him drunk and throw him off a cliff, and thanks to the highly flammable nature of the drink and the bad guy’s naiveté regarding a final cigarette, Bernie prevails.

Back in Germany, he and Goebbels agree to lie to Dalia.  But of course Daddy dearest comes looking for her, and when he does, he gets a big surprise.  As does Bernie.  Being endowed with great insight,  Bernie deduces the truth.  He figures out a way to save the day, but it requires him to give up Dalia, the love of his life, or at least, his loins.

As I noted in 2012, Kerr has a wonderful way with words.  His convoluted plot, if presented in a straightforward manner, would be dark, depressing, dour…  Fortunately, he has given Bernie a wry sense of humor and the dialogue is often surprisingly breezy.   And as I also admitted, I am not a very good historian.  I do poorly when it comes to the yellow pie slices in Trivial Pursuit.  So I am always distracted by trying to figure out which characters are real and which are not, and if the real ones were really like that, or if Kerr is taking liberties.  I’m pretty sure nobody talked like Kerr makes them talk.  Anyway, the author’s note at the end is very helpful in clearing up details like that.

What did I think this time around?  I definitely liked it way more than Field Gray.  I like the Bernie Gunther character and the plot was much more constrained (although still filled with what-the-heck? moments).  And there’s a final twist that I definitely did not see coming, so props to Kerr for that.

Comparatively speaking, I definitely preferred Lori Roy’s novel Let Me Die in His Footsteps, which has an equally surprising plot twist but is much more character-driven.  Does Lady have an edge over Life or Death?  Not quite, the stakes are much higher for Audie Palmer.  You never really think that Bernie’s in any danger, and you don’t really care about any of the other characters.  And I really was surprised by how much I liked The Strangler Vine.  So here it goes to the #4 spot, where Kerr was last time.

Note – not sure what is up with the sheer number of not-set-in-the-present nominees.  So far only Life or Death has been set in present day, the other three are all historical!