Next up: Dugoni’s The 7th Canon 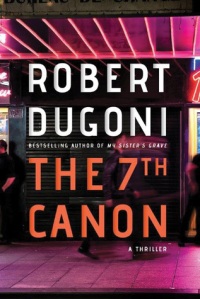 After the first two nominees in the Best Paperback Original category of the MWA Edgar awards, I was totally ready for a legal thriller.  That’s a genre that experienced author Robert Dugoni is familiar with (see his David Sloane series).  Dugoni’s  The 7th Canon is a classic of that genre.

The action is set in 1987, but the plot is timeless, and frankly, I kept looking for a plot point that would require that time frame and couldn’t find one.  The crime in question is heinous indeed.  Someone has tortured and murdered a male teenage prostitute and the body is discovered in Father Martin’s homeless shelter.  A cop at the scene breaks into Father Martin’s study and discovers the murder weapon as well as a cache of violent pedophile pornographic photographs.

It looks bad, and Donley is thrown in over his head when his Uncle Lou suffers a heart attack.  Still, he does his best, and is mystified when it appears that the prosecutor is hinting at a plea agreement – a guilty plea for 25 years to life, with a recommendation for 25 years.  Donley may have only three years of experience, but this sets off his radar – it just doesn’t make sense.  The prosecutor should be all-in for the death penalty.   This might be tempting for the lawyer, but Father Tom would rather be put to death than say he is guilty when he is not.  That leaves the legal team with only one option:  find the real killer.

The legal maneuvering is first rate, the plot escalates nicely, and dangerous situations abound.  Dugoni gives Donley a compelling backstory – at age 18, he may have murdered his abusive father.  The story has numerous twists and turns, but moves forward to the expected victory on the side of justice.  In fact, that may be my only quibble – that the discoveries are too easily made along the way.  It reminds me of the Rockford Files character played by Tom Selleck, who would declare “it’s time for a clue!” and one would handily come forward.  That Lance White led a charmed life.

Still, it’s almost too harsh to wish for more dead ends.  And I’d probably complain about a  switcheroo ending (the priest really did it!).  But how does The 7th Canon stack up to Shot in Detroit and A Brilliant Death?  It’s clearly superior to Shot in Detroit just for quality of writing and plot coherence.   When it comes to A Brilliant Death, I’m really quite fond of the framing device of looking back to past events, and Yocum does an excellent job of it, maintaining the suspense and holding back critical information in a way that feels natural (not like cheating).   For me, it’s neck and neck between Yocum’s and Dugoni’s books, and I give a slight edge to A Brilliant Death for the creativity of the plotting.  It keeps the lead.