Abbott and Yocum: Both new to me

The first two books I’m reading, reviewing and ranking for the Literary Lunchbox Best Paperback Original Edgar are Patricia Abbott’s Shot in Detroit and A Brilliant Death by Robin Yocum.

Yocum’s got great credentials:  he’s a former crime and investigative reporter, winner of more than 30 awards for journalism, and the author of several previous novels, one of which was USA Today’s 2011 book of the year for mystery/suspense.  On the other hand, Abbott has published 65 short stories, has won the Deringer award, and is the mother of Edgar award winner Megan Abbott.  I expected a pretty tight race between the two.

I’ll go ahead and cut the suspense:  Yocum crushed it. 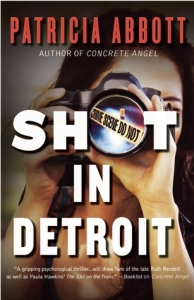 Shot in Detroit has a great concept:  Late-30s, single white female photographer is living on the edge and looking for her artistic edge when her African-American boyfriend calls to ask her to photograph one of his corpses.  (It’s okay because his a mortician and the family is requesting it.)   Voila!  An artistic hook.  Plus, she really gets into portraying the dark variety of death.  But there’s no central crime, no mystery to be solved, and when photographer Violet Hart photographs her own boyfriend’s crushed corpse, it’s jump the shark time.  This is a book that could have been so much more.  Best part:  a real understanding of Detroit and its neighborhoods. 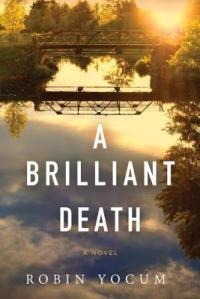 Meanwhile, Robin Yocum’s A Brilliant Death is reminiscent of John Hart’s Down River (although not as dark).  Mitch Malone, the narrator, promises to relate a story that he has kept a secret until the death of his best friend’s father… the story of how he and that friend, Travis Baron, investigated the disappearance (and as becomes evident, the murder) of Travis’ mother.  How their graduation night took a tragic turn.  And how ultimately, justice prevailed.  The book is suspenseful, well-plotted, characters compelling and believable (both heroes and villains), and the writing first-rate.