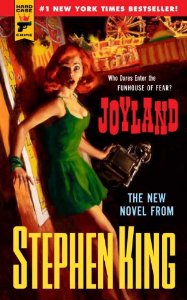 Not a lot of posts from me so far this summer, due to a hectic work schedule.  But that doesn’t mean I haven’t been reading!  (I skip sleep before I skip the printed word.)  And that means I have a lot of reviewing to do.  So let’s get started with Stephen King’s new novel, Joyland.

All I knew going in was that King chose Hard Case Crime –  retro and pulpy – as the publisher for the book.  So my expectation, especially given the book’s cover art, was for a lurid and gritty noir.  Instead, the book is a tender coming of age story.  It’s more Adventureland than Chinatown.

The premise:  College boy Devin Jones takes a job in the summer of 1973 at third-tier amusement park Joyland on a whim.  Years ago, a girl was murdered there, and it’s said that her ghost haunts the ride where she was killed.  King has a light touch with the paranormal in this book, and the focus is on Devin’s self-discovery and the relationships he builds, rather than on the hunt for the killer.   In the book’s satisfying resolution, the ghost is laid to rest and the murderer gets his comeuppance, and Devin has grown from a good-hearted boy into a sensitive man.  The framing device – that 60+ Devin is looking back on his past – is handled well and adds to the sense of nostalgia.

Compared to other Stephen King novels (for example, The Stand)  Joyland is a slim book.  It benefits greatly from the narrower focus.  No summer blockbuster, it’s a sweet read for a breezy backporch.