Norwegian by Night an extraordinary debut 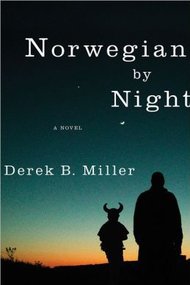 Derek B. Miller’s Norwegian by Night is an amazing debut novel.   It features 82-year old Sheldon (Donny) Horowitz, an American Jew, widower and former Marine, full of regrets and descending into dementia… but slowly.  He’s in Oslo, Norway, having been lured there by his grand-daughter, Rhea, and her Norwegian husband, Lars.  Rhea is the posthumous daughter of Sheldon’s son, Saul.

Sheldon blames himself for Saul’s death.  Saul enlisted during the Viet Nam war to live up to Sheldon’s patriotism, came home after his first tour of duty, hoping to talk to his father about his experience – something that was beyond Sheldon’s capabilities.  Rebuffed, he had a one-night-stand with an unsuitable girl and re-enlisted, only to be killed a short time later.  Unsuitable girl became reluctant mother, Sheldon and his wife became parents again to baby Rhea, but Sheldon never forgave himself.

A complicated man, a man of honor and of action, a man who feels he was responsible for many deaths, not just his son’s, Horowitz steps up to save a small boy from his violent father.  They hide together in a closet, forced to listen silently as the father – a Balkan war criminal – murders the boy’s mother.  In seizing that moment, Horowitz’s journey to redemption has begun.

The two go on the run together, the boy and the old man, each unable to speak the other’s language.   Sheldon’s goal: to take Paul to the family’s cabin in the woods and keep him safe.  His fear:  that the authorities will turn the boy over to his father.  He leaves a nonsensical note for his daughter.

Sheldon proves himself to be remarkably capable and canny, despite his advanced years and his tendency to see and hear people who aren’t really there.  He calls the boy Paul, and dresses him as a Viking Jew, complete with Viking helmet, tunic, and a sword that strongly resembles a wooden kitchen spoon.   The trip to the cabin is event-filled, the final scenes are nail-biters, and the ending is completely satisfying.

Norwegian by Night is beautifully written, filled with suspense, and surprisingly action-packed.  I’d call it a literary thriller, except I’m afraid that people who buy “literature with a capital L” would dismiss it and people who love thrillers will expect it to be too highbrow.  Instead, it’s the best of both.  Norwegian by Night is not to be missed, and I’m looking forward to more from Derek B. Miller.

This entry was posted in Commentary, Review and tagged dementia, Derek B. Miller, Norwegian by Night, Review, thriller, war novel. Bookmark the permalink.