Playdate not much fun. 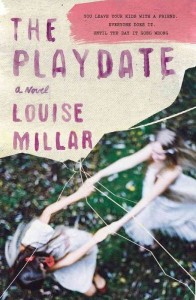 Louise Millar‘s debut novel Playdate is the twisty story of three women:  Callie, a single mom of a health-challenged  daughter who is starting back to work after staying home during her daughter’s early childhood.  Suzy, a gorgeous stay-at-home mother of three with a sexy husband, plenty of cash, and perfectionistic ways.  And Debs, a former teacher, married after a long spinsterhood, who is working at the after-school program that Callie’s daughter attends.

Told in a close third person point of view from each of the women’s perspectives, the reader sees the world as each of the women see it.  However, Millar does withhold information, so we are left with the uneasy feeling that all may not be as it seems. Indeed, Callie is not a perfect mother, Suzy is not a loyal friend, and Debs is not mentally ill.

The plot is this:  Callie has an offer to go back to work in a responsible and creative position.  She’s been a stay-at-home mom, and has developed a BFF relationship with Suzy, who seems a little judgmental but ultimately there for Callie.  Fragile Rae, Callie’s daughter, likes school and it appears that she’ll be fine at an after-school program.  Enter Debs, who works at the after-school program.  She’s socially awkward and is hiding something from her past.  Then, things start to unravel.  After Rae has an accident after school, Callie becomes convinced that there’s a problem with Debs, questions whether she can continue working, and leans on Suzy for support.   Who is lying?  Is Rae in danger?  And if so, from whom?

Here’s what’s good about Playdate: Callie comes across very much the modern woman, pulled in multiple directions, and I enjoyed Callie’s challenges at work and empathized with her need to juggle.  Millar does a great job of keeping the reader engaged, and the suspense is very suspenseful.  The child in jeopardy aspect of the plot is handled well.  The relationship between Debs and her husband is shown to be a very strong and positive one.

Not so good about Playdate:   The reader really doesn’t have anyone to root for. Callie covers up some essential truths in order to use people.  She comes across as likable early on, but I couldn’t get over her fundamental duplicity. Spoiler alert!  Specifically, she becomes friends with and depends on Suzy for support – including financial support – despite the fact that her daughter’s biological father is Suzy’s husband, Jez.  Callie also keeps her ex-husband, who thinks he’s Rae’s father,  in the dark about this for financial and other reasons.  Ms. Perfection, Suzy, turns out to be a manipulative, lying nut job.  And the one person who is truly a good person, Debs, is presented as a neurotic mess and potentially a child abuser, through most of the novel.  It’s like a cross between a chick-lit novel and the Maury Povich show.

The result?  I was simultaneously biting my nails and slightly nauseated through the last 2/3 of Playdate.  Well-plotted, well-paced, and well-written, Playdate is nonetheless not a book that I would recommend to a friend.  However, things bode well for Louise Millar as an author, and I’d definitely read her next novel.