Reading the Edgar Nominees on Kindle. In Hawaii. 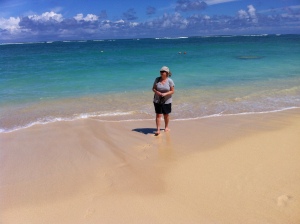 Faithful reader, I am in Hawaii right now.  Do not hate me, despite the daily 80-degree, sunshine-filled days at the Royal Hawaiian (a pricey but worth-it splurge).  I “paid” for this time  with a little work for the ADA and the new dentists in Hawaii.  (Six hours with enthusiastic young people.  It’s awful.)  With the exorbitant fees for checking baggage, I decided the way to get in my goal of reading all the Edgar nominees for Best Novel by making heavy use of my Kindle.

Now, even though I’m not a technophobe, I am a fairly late adopter.  I also learn better if I’m shown something – reading the manual doesn’t really do it for me.  As a result, while the Kindle has all kinds of bells and whistles, I don’t use them. After reading five of the six nominees for the MWA 2011 Edgar award for Best Novel, I can tell you… this is a mistake.   So for the sixth – Laura Lippman’s excellent I’d Know You Anywhere – I got my husband to show me a couple of things.  Much better!

In my previous review of the book, I gave it a big thumbs up.  On rereading, there is no reason to change my mind.  I’d Know You Anywhere is well-written.  The characters are fully three-dimensional, and although far from idealized, are dearer, and more heart-wrenching, because of it.  Lippman is particularly skilled with point of view – I was struck by her retelling the scene where 15-year-old Elizabeth Lerner meets her captor, Walter Bowman.  Elizabeth is seeking a shortcut to a fast-food hangout, but the stream she planned to cross is higher than she expected.

Then she saw a man on the other side, leaning on a shovel.  “It’s not so swift you can’t wade through,” he said.  “I done it.”  He looked to be college age, although something told Elizabeth that he wasn’t in college.  Not just his grammar, but his clothes, the trucker’s hat pulled low on his forehead.  “Just go up there, to where that fallen tree is.  The water won’t go above your shins, I swear.”  Elizabeth did, taking off her boots and tucking them beneath her armpits, so they were like two little wings sticking out of her back… And the man was nice, waiting to help her scramble up the banks on the other side, taking hold of wrists.  He wasn’t that much taller than she was, maybe five seven to her five three, and his build, while muscled, was slight.  He was almost handsome, really… His T-shirt showed sweat stains at the armpits and the neckline, a drop of perspiration dangled from his nose. “Thank you,” she said.   He didn’t let go.

From Walter’s perspective.  He has just raped and killed another teenage girl:

She should be flattered, this girl who no one else had claimed, that a man, a nice-looking man, wanted her.  A man who would please her, if she would allow herself to be pleased.  “Are you going to tell?” he asked.  She said she wouldn’t, and he wished he could believe her.  He didn’t, though.  So he did what he had to do.  He was tamping down the hole he dug when he saw the other girl coming.  How much had she seen?  Anything, everything?  He thought fast, told her how to cross the stream.  He held his hands out to her, and she didn’t hesitate.  Her hands felt cool and smooth against his, which were burning with the new calluses from the digging.

The story travels back and forth in time, between the 15-year-old Elizabeth and her twenty years older self, Eliza, who suddenly receives a letter from Walter.  He claims to want to talk with her, to apologize, perhaps even to tell her what other girls he abducted and where they are buried.   He presumes on their 39 days together, as if they had a special friendship, and wants to play on her guilt to get her to recant her testimony in hopes of escaping his coming execution.  What guilt, you might wonder?  The guilt that comes from being “the girl that lived.”

As with last year’s Edgars, I’ll be reviewing and ranking the nominees.  Laura Lippman’s I’d Know You Anywhere, so far, is the one to beat!

This entry was posted in Commentary, Review and tagged Edgar nominees, I'd Know You Anywhere, Laura Lippman, mystery writers of america, ranking, Review. Bookmark the permalink.