I agree with Steve.

Stephen King named Laura Lippman‘s I’d Know You Anywhere as one of his top ten books of 2010.   I’m a little late in entering the blogosphere on Laura’s behalf, but I found the book acutely mesmerizing.   So when I read King’s Entertainment Weekly column naming the book “the best suspense novel of the year,” I said, “Yes!” 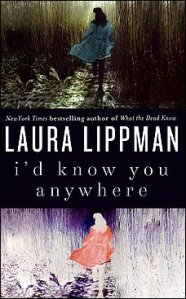 Laura Lippman writes the Tess Monaghan series, starting with her debut mystery, Baltimore Blues.  Tess is a former newspaper reporter-turned-PI, and each book in the series is solidly entertaining.

But I’ve enjoyed Laura’s standalone books even more, and I’d Know You Anywhere is clearly in contention for an Edgar this time up.  (Sure enough, it’s on the list.  Click here to see the competition.)

Haven’t heard the buzz for some reason?  Not to give away too much (no spoilers!), protagonist Eliza Benedict is settled and happy, a young mother with two bright kids and a successful husband.  But she’s a woman with an unfortunate past…at the age of 15, she was kidnapped and held for weeks by a serial killer. With an execution date looming, the kidnapper is bent on convincing Eliza to admit the truth.  But what is the truth?  You’ll know – and be satisfied with the outcome – at the end.  But it’s a twisty, fascinating read every page of the way.  If you’re looking for a last-minute Christmas gift, head for Borders.  You can get the book gift-wrapped by the Boy Scouts while you’re there.