I’ve been mystified by the recent popularity of fictional vampires among tweens and teens, starting with the inaugural book in the Stephanie Meyers’ Twilight series for young adults.  With millions of books sold, the series only gained in popularity with the launch of the movies, featuring Kristen Stewart as Bella Swan and Robert Pattinson as Edward Cullen.

The hubbub surrounding the latest movie, Breaking Dawn, pushed me over the edge.  Previously, the Twilight mania had touched me the way a lot of popular culture does… aware of it, can name the author and all the actors in the movies, sort of know the plot.  All without actually reading a book or going to the theater.  Now, Nicole Hollander was posting links on her blog to articles decrying the misogynism of the movie.

The time had come to check it out.  (Stephanie, thank Nicole.)  I downloaded Twilight onto my iPad and worked my way through it.  I found it surprisingly vanilla, didn’t think Bella seemed all that bright, and was surprised there was so little plot in the plot.  I brought these ideas up to my husband as we walked the dogs, and he said, “Hey, we own the movie.  It wasn’t too bad.”   Once I’d recovered from the shock that he’d A) bought the movie and B) seen the movie without me, I said, “Good!  Let’s watch it tonight.” 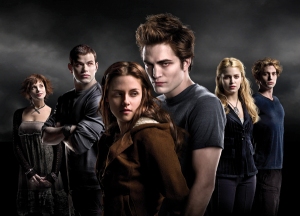 So now I have read Twilight and seen Twilight.  It was a big day for me.  I had two big thoughts.  First, Twilight is the rare case where the movie was actually much better than the book.  What came across as thin and shallow on the page works just fine in the movies, where you can see Kristen Stewart‘s face without having to read her inner thoughts, and you can see the actual Robert Pattinson being awesome rather than simply reading how awesome Bella found him to be.  The visual aspect added quite a bit to the whole experience.   The movie was remarkably faithful to the book, with the entire story transitioning seamlessly to the big screen dialogue and all.   My only sticking point was seeing Peter Facinelli as Dr. Cullen.  He’ll always be the goofball doc with two  moms on Nurse Jackie to me.

The second big thought:  What is it with young women and forbidden love?  I can get that Edward is immediately drawn to Bella, despite the fact that she’s described as a klutz – she’s got that smell the drives him to… well, kill animals in the woods to avoid hunting her down and drinking her blood.  Because he’s not that kind of vampire.

But Bella’s supposed to be immediately drawn to him, as well.  He’s described – and Robert Pattinson lives up to the description – as male beauty incarnate.  And he’s more mature than the other boys, probably because he was born in 1901. Still, within days of moving to Forks, Washington, Bella’s baring her neck in hopes of becoming vampire-ized, so she can stay with Edward throughout eternity.  Talk about a crush.  All this despite the fact that he’s cold as ice, never sleeps, can’t go out in the sunshine, and has pretty extreme mood swings.  Also, his only nourishment is animal blood.

I know every teenage girl wants to be special, for someone to see her as she truly is, deep inside, and to love her – the real her – no matter what the cost.  But really, what is Edward but a grown man, irresistibly drawn to a young girl?  He’s a little Humbert Humbert-like.  He watches her, following her, entering her bedroom at night to watch her sleep.   His love is chaste because it is too dangerous to give in to.

I probably won’t read more Stephanie Meyer, or see any of the other films. Maybe because I’m a mom.  I can see that these parents are making a big mistake. Bella Swan’s mother is in Jacksonville, Florida, with her semi-pro baseball player second husband.  Her dad, the chief of police yet, is an amazingly ineffectual, benevolent presence.  I just want to sit them both down and say, “Wise up!  Your daughter is going to ruin her life with this loser boyfriend.”  If only Edward looked like a 100+year old weirdo.  Wrinkly.  Maybe a comb-over.  Adult diapers.  I think that would be helpful in putting this all in perspective.