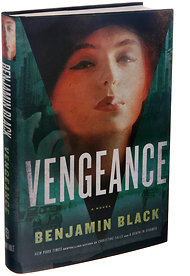 I’ve liked Benjamin Black – aka John Banville – and reviewed two of his books, Elegy for April and A Death in Summer.  Now comes his latest book, Vengeance, again featuring Dr. Quirke and his friend Detective Inspector Hackett, with a strong supporting role for Quirke’s daughter Phoebe.

As usual, Black’s prose is elegant, his characters multi-dimensional, and Quirke  has his typical rough appeal for beautiful women, falling into bed with somewhat more regret than forethought.  And just as you know that any woman involved with Lee Child’s Jack Reacher will likely be dead halfway through the book, you know that any woman involved with Quirke has a good chance of being up to no good.

The mystery for this Quirke outing hinges on the relationship between Ireland’s Delahaye and Clancy families.  They are ostensibly partners in a family business, but clearly the Delahayes have gotten the best of the deal.  As Black says, “A Clancy cannot say no to a Delahaye,” and that’s why young Davy Clancy agrees to go sailing with Victor Delahaye.   Delahaye’s motivation is less clear.  When out to sea, Delahaye produces a gun, tell Davy a long story about self-reliance, then shoots himself in the chest.  Why has he killed himself?  And why has he chosen his partner’s son to witness his suicide?  Enter Inspector Hackett, who as Black notes, “felt like a monkey with a coconut and no stone to crack it on.”  And from Hackett, to Quirke.

Of necessity, Vengeance has a lot of interconnected characters, many of whom are vaguely unpleasant, including Delahaye’s much-younger wife, Mona, and his twin sons, James and Jonas.  The stakes are raised for Quirke and Hackett when Delahaye’s business partner Jack Clancy goes missing, turning up dead two days later – like Delahaye, in his boat, but not a suicide.  Murder.

The book’s resolution comes through the untangling of the many relationships – some known, some hidden, and some misunderstood – between those in the two families.

Overall, Vengeance is worth reading for Black’s style, the characters, and the leisurely unraveling of the plot.  With not much at stake, the reader should feel comfortable taking the time to enjoy the experience.

Want to experience the audiobook version of Vengeance?  It’s read by someone with an awesome Irish accent, evocative and yet still completely understandable.