Kerr’s Prussian Blue up next

Prussian Blue.  It’s 528 pages of fictional Berlin detective Bernie Gunther interacting with Nazis in (framing device) 1956 and (very meaty main plot) 1939… and I have to say, it’s the most interesting and entertaining Philip Kerr book I’ve read.   It’s the fourth book that I’m reading, reviewing and ranking in the Literary Lunchbox take on the MWA Edgar for Best Novel.

As previously mentioned, I’m generally not into historical mysteries, especially those featuring swastikas (notable exception:  The Boys From Brazil).  I’ve read two Bernie Gunther books previously, when they were up for Edgars, and generally ranked them towards the bottom of the list.  (Field Gray review  and The Lady From Zagreb here.)  In fairness to me, they didn’t win. 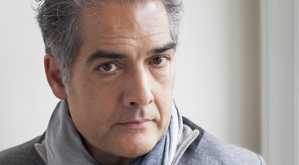 That situation might change this year, as, sad to say, Philip Kerr passed away recently at the age of 62.  It certainly made me want to give Prussian Blue a full and fair reading, which meant slowing down, and paying especially close attention.  So that’s what I did.  It paid off.

The book begins in 1956 on the French Riviera, with our smart-and-jaded Bernie working as a hotel detective, still hoping for a reconciliation with his estranged wife when he gets an invitation to meet her for dinner.  He goes and is surprised to find that his dinner companion is not his wife, but a long-time enemy, Erich Mielke, now deputy head of Stasi, the East Germany Security Service.  Mielke wants Bernie to poison a former colleague in order to tie up some loose ends from a previous situation, but Bernie’s smart enough to know that even if he accedes to the request, he’ll become the next “loose end” requiring tying up.  Mielke’s thugs – including Frederich Korsch, a man Bernie knew well back in the day – bring him to the brink of death to secure his cooperation, but this only makes stubborn Bernie determined not to do their bidding.  He goes on the run.  While making his escape, Bernie reflects upon a previous case that brought him close to Hitler himself, even as Germany was readied for the attack on Poland that would launch WWII.

Fade to April, 1939.  A man has been shot on the terrace at Hitler’s private home at Berchtesgaden.  It’s critical to solve the murder and ensure security before Hitler arrives there for his 50th birthday celebration.  Nazi boss Reinhard Heydrich assigns Commissar Gunther – a smart, honest cop – to solve the crime.  On arrival, Bernie finds that he must please Martin Bormann, who runs the show.  It’s soon clear that there is no failure allowed – the crime will be solved, either by finding the killer, or fitting one up.

Bernie’s not surprised to find that the dead man, a local engineer named Karl Flex, is incredibly unpopular with the locals, throwing people out of their homes in forced sales at bargain basement prices, strong-arming the local whores, and serving as Bormann’s bag man on cash runs to Switzerland.  The entire enclave is a money machine for Bormann and his crew.  These facts come out over time, and offer Bernie and his assistants, Frederich Korsch and local SS Capt. Hermann Kaspel, a plethora of potential murderers.  And it soon becomes clear that there are some that would prefer to see Bernie fail, as there is more than one attempt on his life.  When Kaspel is killed in a rigged car wreck when Bernie should have been with him, Bernie knows he must be making progress.

Bernie does discover who killed Flex and why, and sets out to capture him, accompanied by one of Bormann’s aides, Wilhelm Zander.  Bernie believes that if he can arrest the man, justice will be done, Bormann will release the innocent fall guy currently in the clink, and he’ll be able to get two inept cops off the hook (they’re facing a firing squad for no good reason).  But misplaced optimism is a Bernie Gunther hallmark… so when he captures the killer, Zander shoots him, then turns the gun on Bernie.  Our hero escapes, but mostly due to dumb luck.  And while things turn out okay for him, when he returns to Bavaria, he learns that all three of the men he’d hoped to save had been killed that morning.  He also meets a dead end in his quest to bring down Bormann.

Flash forward to 1956 – his 1939 friend and colleague, Frederich Korsch is now his enemy, but Bernie has a new name and a new chance at freedom in Munich.

There’s a lot to like about this book.  With some minimal wikipedia-ing, I am convinced that Kerr did a great job on the historical accuracy aspect of it.  I have no problem believing that he also did an excellent job in his portrayal of historical figures.  One character – female architect Gerdy Troost, who was a staunch Nazi and strong Hitler admirer – decides to help Bernie root out the corruption, and she is a sympathetic figure in Kerr’s hands.  Characters are fleshed out and credible.  The plot is twisty and the violence is compelling and realistic.  Also, Kerr has a wonderful way with words.  I had to stifle myself from reading selections out loud to my husband; after the third such passage, Mark was out of patience.

The best thing about Prussian Blue is Bernie Gunther himself.  He’s sharp and funny, is more likely to get beaten to a pulp than he is to do the beating, and is liable to succeed mostly through sheer persistence, but also gets a normal helping of dumb luck along the way.  His morality is like Teflon; despite all the evil he sees, it endures.  As he thought back to that April in 1939 and all that had occurred, he reflected, “Most of all I remembered being almost twenty years younger and possessed of a sense of decency and honor I now found almost quaint.  For a while back here, I think I sincerely believe I was the only honest man I knew.”  He may be rueful, but at the core, he’s unchanged.

So how does the book stack up with the other nominees?  For character, complications, plot and atmosphere, I’ve got to give it up for Philip Kerr’s Prussian Blue.  It goes to the top of the ranking.