I’m in trouble with Jane Steele 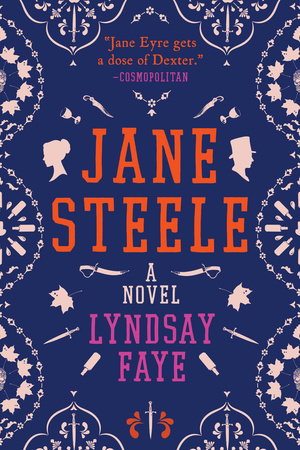 Lyndsay Faye’s novel Jane Steele is a genre-bending page-turner that’s winning accolades from critics and on Amazon.  This is Faye’s second turn at bat for the Best Novel award (her first being The Gods of Gotham, also a historical mystery).   Still, she lost out that year to Dennis Lehane’s Live By Night, another historical.

Thus the question  – could an homage to classic novel Jane Eyre win a Mystery Writers of America Edgar award for Best Novel?  – seems to be answered in a strong affirmative.

Cosmo’s blurb on the cover says the novel is a mash-up of Jane Eyre and tortured serial killer Dexter.  This is certainly true from Jane’s perspective.  She sees a parallel between herself and Bronte’s heroine – both had difficult upbringings, were orphaned, and became governesses.  But Jane Steele is made of sterner stuff than Bronte’s Jane, taking things into her own hands when she faces injustice.  With her first murder – a strong push that results in the death of her cousin, who had been tormenting her – she sees herself as morally corrupt and irredeemable, unworthy of the happiness she seeks.  Although she has always been told that Highgate House will be hers one day, she agrees to be cast off after her mother’s death, attending a sadist-run school, where she manages to make friends.  Her second murder occurs here, and she and her young friend are soon on the run, making ends meet as best they can, and encountering the occasion for murders #3 and #4.  (Rest assured the deceased deserved their fates.)

Separating from her friend, she finds the opportunity to return to her childhood home under a false name (Jane Stone) as the governess for Sahjara, a young girl of Caucasian-Indian heritage.  It is here that Jane falls in love, as did the other Jane, with the lord of the manor (Mr. Thornfield).  Only instead of a secret wife in the attic, Thornfield is a physician with a secret morgue in the basement.  Sahjara is the orphaned daughter of the love of Thornfield’s life who happens to be his best friend’s sister, by a ne’er-do-well Englishman.  Thornfield is paying a deep, self-imposed penance for his misplaced guilt in failing to keep Sahjara’s mother safe.

There are mysteries aplenty at Highgate House, where they are assailed by villains at every turn seeking Sahjara’s mother’s jewels (thus murder #5)..  As far as Thornfield and his friend Sardar Singh know, those jewels are long gone, so their options for a peaceful life are limited.  Add in the tortured love story – Jane and Charles are in love, but will never be together due to his penitent vow – and Jane is left with naught to do but get to the bottom of the mystery, find the jewels, and vanquish the bad guys.  Which she does, in a thorough manner, with some unlikely allies.   And I did not for a moment see the underlying betrayal until it was revealed by the author.  Good going, Lyndsay Faye.

The book has it all – suspense, intrigue, romance, a compellingly likable heroine, and a twist of snark.  Jane Steele is just the kind of book that I might not read, but that would have been a mistake.  I’m in real trouble here – it’s tough to compare Jane Steele to Reed Farrell Coleman’s Where It Hurts, which I loved, because they are so different in type.  However, I’ve got to say that Lyndsey Faye set herself a tougher job, and accomplished it quite thoroughly.  Her book is a singular experience.  As a result, Jane Steele is taking the top spot in the LL Edgar ranking for Best Novel.