Summer is supposed to be a time of long, lazy days on the beach, in a hammock, or, as we say in Michigan, “Up North.”   Lots of fresh tomatoes, rose wine, and trashy novels.

Well, except for the wine, I’m not getting much of that idyllic summer,  but I am getting in lots of reading.  Tons of new books – mysteries, thrillers, noir… they’re mine for the taking. I’m not going to review all of them, or there wouldn’t be time to read more.   I’ll just review a few of the books I have particularly enjoyed.

First up is a thriller, The Last One, by Alexandra Oliva.  This is Oliva’s debut novel, and a crackling good one it is.  The setting is very up-to-the-minute:  a Survivor-esque reality show called In the Dark.  But with this show, the only way to get off is to use the magic words (“ad tenebras dedi,” Latin for  “I surrender to the dark”)  and the only way to win is to be the last one left.  The prize is huge. As the contestants delve deeper into this alternate world, a plague strikes the real world … and they don’t know. 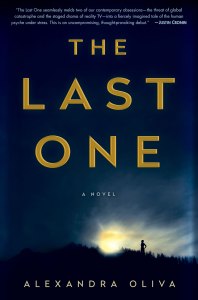 Oliva switches back and forth from a omniscient perspective to the POV of one of the contestants, a determined young woman.  The twelve characters are named according to their stereotype in the third person chapters.  Black Doctor is a male, African-American physician.  Rancher is a western type, Waitress is a hot mess, Cheerleader Boy is a relentless cheerful gay, Biology a lesbian who teaches seventh grade science, Air Force a compactly powerful military man, Engineer a Chinese-American man, Tracker a hunter type, Banker a business man.  The young man called Exorcist may be certifiably crazy.  Asian Chick morphs into Carpenter Chick when its discovered she has skills.  And then there’s Zoo – our protagonist, young, blonde, and female.  She works in a wildlife sanctuary.  The host of the show is a “B-list celebrity” who hopes to revive his career.  (I pictured Ryan Seacrest.)  We see the production, the manipulation, the editing that heightens the drama.  We also see the human side of the contestants that the camera doesn’t capture.

Zoo’s chapters are something else.  She’s stranded in the wilderness, following clues that she interprets according to the rules of the game, making her way back to civilization, scavenging for food, catching and cooking squirrels, and all the while convinced that secret cameras are recording her every move.  The reader knows what she doesn’t know and then can’t admit… that life as she knew it is over, there will be no million dollar prize, and in fact, she will be lucky to make it through her adventure alive.

The Last One is a great summer (or anytime!) read.  The plot is compelling and moves along at a breakneck pace.  The writing is crisp, dialogue true, and characters – especially Zoo – interesting.  There’s a heartbreaking side to her adventure which I won’t spoil for you, and also a possibility of hope.  I wouldn’t be surprised to see the book up for an Edgar for Best First Novel in 2017.

I’ll definitely be on the lookout for Alexandra Oliva’s next book!

This entry was posted in Commentary, Review and tagged Alexandra Oliva, reality show, The Last One, thriller. Bookmark the permalink.