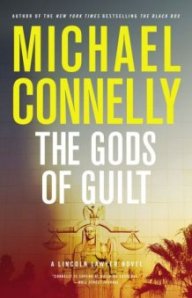 Life gets busy, I keep reading, but reviewing falls by the wayside.  I’ve got a stack of books to tell you about that is embarrassingly high.  I’m starting with Michael Connelly’s The Gods of Guilt because it is a) new and b) totally gift-worthy.  It’s the fifth novel in the Lincoln Lawyer series (I’m not counting Mickey Haller’s brief appearance in the Harry Bosch book, Nine Dragons).

Here’s the set-up:  As usual, Mickey is scrambling for cases.  He still prefers to work out of the back seat of his town car, with his driver up front, but now he’s got a bit of an entourage.  Bills to pay.   And he’s got a new client – an Internet pimp named Andre La Cosse is accused of murdering one of his girls, Giselle.  The twist is that the person who recommended Mickey to Andre is the murder victim.  Turns out she was an old client who supposedly left the life after testifying against a big-time criminal.  Mickey is soon convinced that he has that rarest of clients: an innocent man.  Not a nice man, of course.  But not guilty.

As always with Connelly, the book is very well-plotted, the characters are three dimensional, and the danger is real.  It’s a legal thriller- and boy, does that courtroom work shine.  How Haller gets unnamed bad guy A to flip on unnamed bad guy B – bad guy names withheld to avoid spoiling your enjoyment – is smart and risky, just what you’d expect.

The Lincoln Lawyer series has a lighter feel and a lot of humor in comparison to other courtroom dramas, but Connelly doesn’t rely on formula.  Where Mickey was as sassy as a newly-minted penny at the start of the series, he’s now a bit more burnished, more self-reflective, and a little sadder.  He’s got a lot of baggage and made some bad decisions.  It only serves to make the character deeper and more interesting.

So hie thee to your local independent bookseller for a copy or two, wrap them in brightly colored paper and place gently under the tree for opening Christmas morning.  Guaranteed to make for a comfy afternoon by the fire.

This entry was posted in Commentary, Review and tagged Lincoln Lawyer, Michael Connelly, Mickey Haller, Review, The Gods of Guilt. Bookmark the permalink.