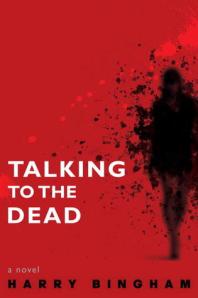 Ever hear of Cotard’s Syndrome?   Nope?  Me neither.  But it’s a real medical condition, and D.C. Fiona Griffths has it.   I’m not going to go into details, and don’t you go Googling it.  Let author Harry Bingham reveal it to you in his own time in this series debut.

Let’s just say that D.C. Griffiths has a level of comfort with dead bodies that most don’t have – and it serves her well.   In Talking to the Dead, it’s her responsibility to unravel the murder of a prostitute and her six-year-old daughter.  The dead daughter seems to have something to say.  Under pressure to close the case with the obvious, Griffiths uses the discovery of a link to a long-dead wealthy business man to keep digging.   What she uncovers is even twister than expected, and the resolution reveals the lengths that the detective constable will go to for justice.

Harry Bingham brings the best of the gritty police procedural and pairs it with a compelling and evolving protagonist in this series.  Click here to read what Bingham has to say about Fiona Griffiths.  It’s okay, he’s not going to give it away either.  Especially good news for me is that there’s a second one in the series on the way.