Thinking big with The Art of the Idea 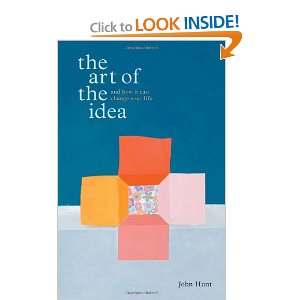 One personal challenge for me is getting out of the weeds, metaphorically speaking.  In my job, adding one or twenty or 120 new members is the usual work of the day – tweaking our message to encourage dentists to join – and doing research and developing new resources to expand the value of membership incrementally is also on the daily task list.

Thinking big, making space for ideas that don’t fit this mold can be a challenge.  I went to a continuing education program on innovation leadership that was very interesting.  I’ve already used several new techniques to spur creativity and innovation.

During the deluge that was the Printers Row Lit Fest, I popped into Sandmeyers Bookstore on Dearborn and discovered a number of books on the broad topic of creativity and innovation.  One of these was John Hunt’s The Art of the Idea and How it Can Change Your Life. I took pictures of the other books on the shelf for later library-ordering, but the Hunt book I purchased.  It looked different, artier, almost handmade.

Turns out the book design and artwork is by a South African artist named Sam Nhlengethwa and the author, John Hunt, was involved with Nelson Mandela’s election campaign in 1993.  He subsequently moved to New York City, and is now back in South Africa.

The book is comprised of 20 observations.  The number of pages per observation varies, sometimes as few as one, sometimes as many as five.  Each observation seems self-evident – for example, Observation No. 12 is Never Put Lipstick on a Pig.  Or, another way to say it, you can dress up a bad idea all you want… but it’s still a bad idea.  A poor product, poorly executed, which is unsatisfactory to the buyer, can’t be saved with bells, whistles, or marketing. Tweaking it doesn’t help.  Tossing it out and starting over might.

The book is exciting because every page or two, you think “I can do that!”  Yes, I can bring together people with different experiences and views.  Yes, I can listen and think and get excited and give people the space they need to do that, too.   Yes, I can look outside my own company, even my own industry, to see interesting ideas that might shed some light on what we ought to do.  Yes, I can hold two divergent ideas in my head at the same time and see how they might interact to create something new and successful.

But it’s distressing, too, because the way organizations work diminishes the likelihood of success to almost an infinitesimal nubbin.  As Hunt points out, habit is a very, very hard thing to break.  It has strong roots.  Habit masquerades as tradition.  It masquerades as incremental change.  It has as its motto, “If it ain’t broke, don’t fix it.”  Or maybe, “Don’t throw the baby out with the bathwater.”

At the personal level, innovation is hampered by “They will never go for it” and “Let’s do a pilot” and “It’s a great idea, just not the right time.”

Sigh.  The answer?  Maybe “think big in a small way.”  Hunt doesn’t say it, that’s my translation.  Set yourself free to innovate in the corner of the world where innovation can grow and hope it catches fire.

This entry was posted in Commentary, Review and tagged creativity, innovation, John Hunt, Sam Nhlengethwa, The Art of the Idea. Bookmark the permalink.

One response to “Thinking big with The Art of the Idea”