Mea culpa. Back with Jack Reacher!

I’m happy to be back  to blogging after a crazy few weeks.  Fortunately, I can report that while I was not reviewing, I was definitely reading, and there is a humongous stack of books on the “to review” list. 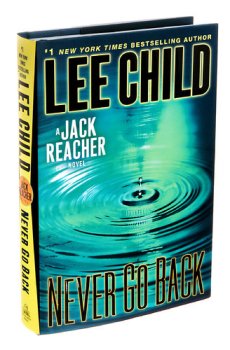 I’ll start off with an easy one:  Lee Child’s new Jack Reacher novel, Never Go Back.  There’s no deficit of reviews out there.  In the Chicago Tribune, Michael Robbins is critical, but “swigs down” the latest Reacher anyway, all while positing that perhaps the time has come for Lee Child to move on to another protagonist.

Meanwhile, at the New York Times, Janet Maslin is an out-and-out fan.  She’s got a few nits to pick, sure, but mostly it’s about the ride.

So, in the spirit of full disclosure, I’m a Reacher fan.  One who has read every single Reacher novel and the few short stories I could find.  One of those people who got super-annoyed when Paramount cast Tom Cruise (Tom Cruise!) in the movie.  (Read more about that here.)  Seriously, Lee Child himself would have been a better choice.  Some of the books are better than others, but they’re all pretty much thumbs up in my book.  My husband, on the other hand, read a couple and then gave up on Jack Reacher.  He demands character development.

Needless to say, I liked Never Go Back.  I agree with every nit picked by both Michael Robbins and Janet Maslin, but that didn’t spoil it for me.  I buy that Reacher wins every fight he’s in, no matter how outnumbered or out-gunned.  I buy that almost every woman he meets is both attractive and romantically available.  I like his way of thinking and his way of talking.  I was even okay with the book where we were not sure at the end if Reacher was killed.  (Spoiler: no, he wasn’t.)  But I do think that Child cheated, big-time, with one of the plot threads.  It kinda bugged me.  I’ll say no more.